- July 15, 2019
With all the warranted protesting (Of which I will write a post on in the future after further research.) at the Full Council meeting on Tuesday 9th July it was buried that the council debated and voted unanimously to the motion for the council to work to increase menopause awareness among its staff and across the wider community. (The word ‘menopause’ comes from ‘meno’, meaning your menstrual cycle, and ‘pause’, meaning to stop.) I think this is a great idea and something that reaches further then the inside of New County Hall. As something that will affect half the population it is worth talking about and removing the stigmatisation. The website Rock My Menopause has great resources on this, and have started a campaign to stamp out the taboo and raise awareness of the menopause. You can start right now on social media with only a simple post, using the Hashtag; #Menovist (One who stands up for those going through the menopause : a person who openly encourages and engages in conversations around menopause and plays a part in stamping out the taboo.) And saying how you are going to talk about it and how it is nothing to be ashamed of. Simply starting a conversation on it like this can go along way to breaking down these pointless social taboos.
Encourage people to talk more about it. And if you are someone who is affected by it find the confidence to seek advice from your healthcare profession and do some research. The average age of women going through a natural menopause is 51-years-old, but it can happen at any time. So let's start talking about it right now! 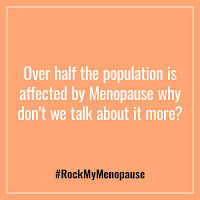 Popular posts from this blog

- July 23, 2019
After a recent police report at a Parish Council meeting we heard about a scheme Devon and Cornwall police offer called Lay-observation. The scheme is where a member of the public can apply to shadow police officers to observe all the hard work that they do. (You too can apply by following this link.)

After hearing about the scheme, I decided to apply and was thrilled to be able to go and spend an afternoon with the Police services within Truro. They were very kind and welcoming and more then happy to answer any and all questions that I asked them. It was a interesting afternoon, however there was a negative part which was where I witnessed how stretched these hard working police officers are. With just 5 officers to cover the huge area around Truro they are forced to work above and beyond what can be expected of anyone.

Just in my afternoon alone two officers had to stay on and work overtime due to not having enough staff to deal with everything happening that afternoon. (I was told…
Read more

- June 26, 2019
St. Enoder Parish Council (Along with many other local councils) recently received an email in regards to Cornwall Council declaring a climate emergency, and asking the parish council to act and to help combat climate change. As such St. Enoder Parish Council declared a climate emergency and set up a working group to work on ways both the parish council and the community can combat the impending crisis that is climate change. I was happy to second this motion as proposed by our Cornwall Councillor Dick Cole. Along with this I put my name forwards along with my other fellow Labour Parish Councillor (Mandy Gregory) to join the working group and to start work on fighting climate change. Both Cllr Gregory and I attended Labours Green Industrial Revolution at the Heartlands in Pool, where many enthusiastic debates took place over what can be done at a local level to combat climate change. I learnt a lot and will bring many of the ideas from the event to the working group to look at being …
Read more

- July 10, 2019
It's that time of year again when the sun is out and the Flora and Fauna is at its most beautiful and free. Yet just as last year I'm compelled to write the same thing again, as I'm sure I will next year. Last year I wrote a letter to the Cornish Guardian about how lovely it is to have hedges and foliage but it can be dangerous. And once again I have had people getting in touch with me in regards to how dangerous some of the overgrown paths are due to the inability of Cornwall Council to maintain them.
Now hedges and trees are a key part of the Cornish landscape and important in our fight against climate change. So cutting them should only be done when they prove a present danger and once again in our Parish some do. That is why it is paramount to have them trimmed back safely to allow easy passage, so no one gets hurt. Although it may sound simple to trim hedges it can be tedious and difficult. First the owner has to be identified then the correct action taken. If it is a…
Read more